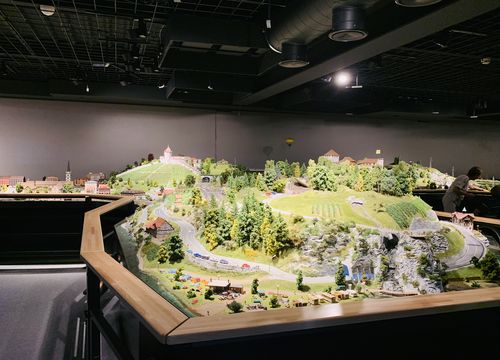 Snow-covered mountains, picturesque waterfalls, cows decorated with flowers in fresh green pastures, idyllic towns lined with timbered houses and, at the heart of it all, flags bearing a white cross set against a red background. This is, of course, Switzerland – only a lot smaller than you might initially think. The scenes described above are set in the indoor miniature world of Smilestones, in the Swiss town of Neuhausen am Rheinfall. The name – a combination of the words “Swiss” and “milestones” – pretty much says it all. Visitors can marvel at 1:87 scale models of typical Swiss landscapes and landmarks featuring carefully crafted figurines, buildings and model vehicles that depict both ordinary and imaginary situations. If you look hard enough, you can even spot a UFO. To give this tiny world a stable footing, the creators opted for a substructure made of aluminium profiles from item.

On 24 November 2018, Smilestones opened its doors to reveal its first section. Covering approximately 135 square metres, it shows Eastern Switzerland’s hotspots – from the Säntis mountain and the picturesque old town of Schaffhausen right through to the Rhine Falls. An impressive 15,000 figurines, 400 cars and 80 trains feature in this section alone. “It’s about making visitors smile and letting them forget about the outside world for a moment,” says Patrik Stutz, head of engineering at Smilestones. Needless to say, such an ambitious project takes time. In fact, construction work on the Swiss miniature world didn’t actually begin until seven years after the initial idea was formed. The first section took eleven months to build. The second – which spans around 120 square metres – took ten. Unveiled to the public on 28 September 2019, this 20-metre-long addition is dedicated to Switzerland’s world-renowned mountains and includes scaled-down replicas of the Eiger, the Mönch, the Jungfrau and the Matterhorn (a full six metres tall!). The tight-knit team at Smilestones includes people with disabilities, as Stutz – who has undertaken additional training in community-based management – attaches great importance to social commitment. The attraction also features a gift shop for miniature enthusiasts of all ages and a bistro where visitors can enjoy an apéro – a get-together over drinks and snacks – before or after their tour.

When it came to planning and building the site, the designers were forced to venture into uncharted territory, as a miniature world of such proportions was unheard of in Switzerland. Among other things, this involved creating a substructure to give the landscapes the stability they needed. Acting as a framework, it was covered with three layers in total – first Lightwood panels and then expanded polystyrene and Styrodur boards, followed by plaster as a sealant. A close adviser with over 30 years’ experience in model making who had previously used item profile technology to good effect recommended the team use the aluminium profiles from the item MB Building Kit System to build the substructure. After an on-site meeting with experts from item Switzerland, the designers quickly made up their minds. “We had certain criteria regarding the substructure for the miniature areas. First off, it has to be stable enough that our staff can walk and work on top of it. Secondly, the whole system needs to be adaptable so we can build models in any height, length and width. The fact we have to accommodate differences of up to 30 mm in floor levels shouldn’t be underestimated, either,” explains Stutz. Aluminium Profile 8 40×40 E and Knuckle Foot D40, M8x60 had no difficulty in meeting these requirements.

Aluminium offers a wealth of benefits

Originally, the creators had considered using wood for the substructure, but after realising they needed to make things bigger, they quickly opted for aluminium. This presented various advantages. Aluminium is significantly more stable and less vulnerable to external influences. The shrinkage and expansion of wood, by contrast, can have far-reaching consequences. Furthermore, the item MB Building Kit System offers its own specific benefits, making it the ideal solution all in all. “Thanks to its lightweight yet stable design, this item solution offers us exactly what we need. Nothing works better for us in terms of versatility and material. We can cut the profiles to the desired length ourselves. They can be used horizontally and vertically and accommodate heavy loads,” says Stutz. So far, 1.2 kilometres of profiles, 1,800 fasteners, 450 Knuckle Feet and 800 T-Slot Nuts have been installed.

Based on the encouraging experience with the item aluminium profiles, the team made even greater use of them for the second, mountain-themed section. The decision to do so was also influenced by the boards used to cover the substructure. In the first themed area, these boards still had a modular design and were made from less stable Lightwood to ensure they could be taken apart if required. It became clear, however, that there was absolutely no need to do so. According to Stutz: “That’s why we installed sturdier spruce boards and more aluminium profiles for the mountain landscape right from the start. This move wouldn’t have paid off with Lightwood because it’s not stable enough. But now, with more profiles and spruce boards, an area of one square metre can support up to three members of staff.” Stutz doesn’t just appreciate the versatility of the item aluminium profiles. He believes the company has the whole package. “The personal relationship is another key factor. The field staff are incredibly pleasant to deal with. The whole team at item Switzerland has since visited us and we have got to know each other. It’s been fun,” he says, summing up the collaboration, which will continue for the upcoming sections.

Caption 1: The aluminium profiles from item can create versatile and stable structures.

Caption 2: The combination of aluminium profiles and Knuckle Feet systematically evens out differences in height.

Caption 3: The experience gained from the first section came in useful when building the mountainscape.

Caption 4: The landscapes at Smilestones are designed and crafted with true attention to detail.