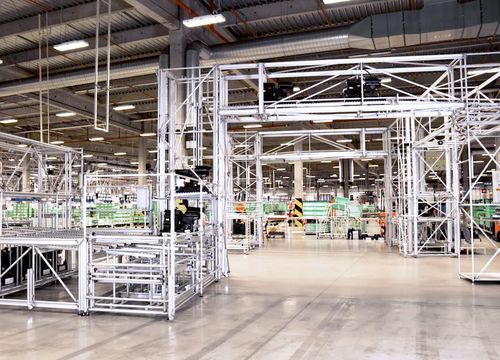 Cost-efficient and intelligent – Karakuri, a central aspect of the lean philosophy, uses mechanical energy to create simple automation solutions. Among the many companies making the most of low-cost automation is Toyota Peugeot Citroën Automobile (TPCA) based in Kolín, Czech Republic. It is using a Karakuri bridge from item to transport air conditioning units for small vehicles in its production plant while ensuring tugger trains can travel underneath the bridge unhindered. This Karakuri application results in an efficient material flow and enhanced productivity.

At the Czech car manufacturer TPCA, the air conditioning units for the vehicle models Toyota Aygo, Peugeot 108 and Citroën C1 move from one production line to the next as if on a conveyor belt. However, this automatic transport is designed as a Karakuri application and, for the most part, is a purely mechanical process that uses gravity.

Initially, TPCA used transport trolleys to bring the necessary air conditioning units to the production line. Unfortunately, these trolleys crossed the routes used by tugger trains, frequently forcing them to come to a halt and thereby interrupting the material flow and rendering processes inefficient. While searching for a cost-effective solution that would optimise these processes and boost productivity, TPCA turned to item – a market leader in building kit systems for industrial applications. The company has many years of experience working with Karakuri/LCA applications and closely collaborated with TPCA to develop a solution based on its Lean Production Building Kit System that was perfectly tailored to the production scenario. During training sessions, TPCA staff expanded their knowledge about the potential applications of the lean components from item.

Today, the air conditioning units are transported across a Karakuri bridge six metres long, six metres wide and five metres tall. Materials are supplied via a shooter. One after the other, the air conditioning units, which have been placed into small load carriers (SLCs), are lifted up a tower by a linear axis and carried from one side to the other on roller conveyors over the tugger train route below. After being turned 90 degrees and travelling another three metres, the units reach a second tower, where they are lowered back down again using purely mechanical means and can be removed for further processing. The empty SLCs move into a third tower where a linear unit lifts them up. They are initially stacked, before roller conveyors then take them back over the tugger train route in stacks of four. Once they have been brought back down to ground level in the fourth and final tower, the stacked SLCs can be removed and refilled with new units. The entire construction has been built using linear technology, Profile Tube System D30 and matching fasteners from item.

All in all, by deploying the Karakuri bridge, TPCA has been able to automate and optimise its production processes and take strain off its staff. This has resulted in far more efficient operations while keeping investment costs low compared to conventional automation systems.

Captions 2 and 3: One after the other, the air conditioning units, which have been placed into small load carriers (SLCs), are lifted up a tower by a linear axis and carried from one side to the other on roller conveyors over the tugger train route below.