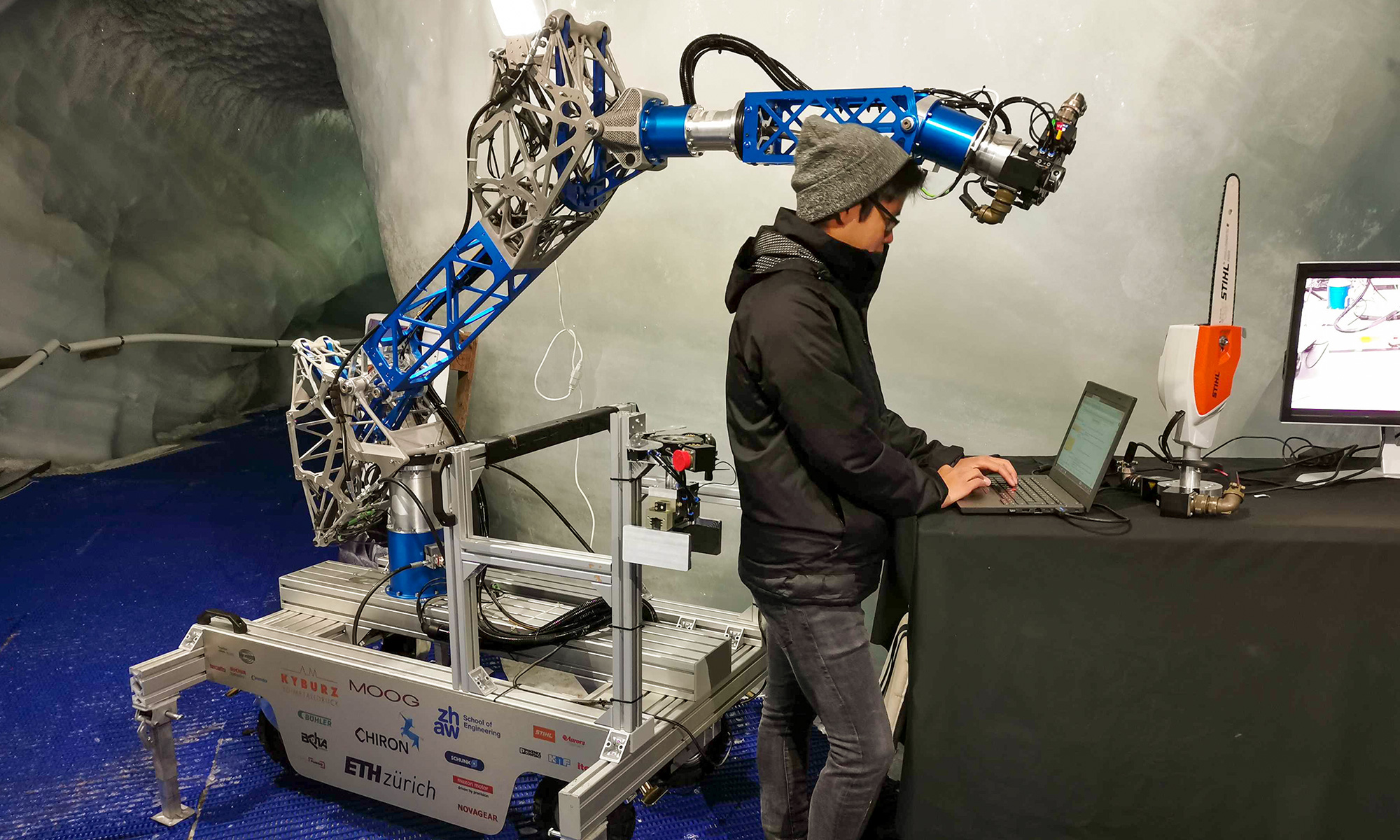 Excelling together as a team

The 13-strong CHIRON team consists of eight mechanical engineering, two electrical engineering and three systems engineering students. While the ZHAW students are involved in this endeavour as part of their bachelor projects, for the ETH team members, CHIRON is a “focus project” – an assignment completed in the final year of a bachelor programme in which students put the theoretical knowledge they’ve learnt throughout the course into practice. However, they will also ultimately be writing about the construction site robot in their theses. The first step is, of course, always the hardest: “The first few weeks were a real challenge. We were making something completely new, so there wasn’t really anyone to simply teach us what to do,” says Peter Zhang. He studies mechanical engineering and was part of the team that designed the robot’s arm, which is capable of dynamically lifting loads of 30 kg forwards and weighs just 74 kg. Similar robotic arms are usually four to five times heavier.

ETH uses item profile technology a lot. Everything can be extended very easily, which is a huge advantage.

A variety of tools can be attached to it, and when doing so only the software has to be modified. For example, two team members have already developed a plaster spray tool, complete with a pump and a special application, which enables the construction site robot to move along a wall and distribute plaster. Due to time constraints, the team decided not to implement the motorisation it had originally planned, opting instead for a modular solution with four wheels. “ETH uses item profile technology a lot, so it didn’t take us long to get in touch with item. Its technology enables us to react quickly and flexibly. Everything can be extended very easily, which is something we noticed straight away in the project. This is a huge advantage,” says Peter. The team also added a protective enclosure from item that provides protection from the tools attached to the robot, such as chainsaws, while also preventing any elements protruding or bursting out if the hydraulics in the robot arm are used improperly.

Construction site robots are also a valuable asset on the moon

However, the use of this robot is, by no means, limited to construction sites. While attending a spectacular event, the team was able to demonstrate what the future could have in store for CHIRON. From 17 June to 3 July 2019, the IGLUNA project took place in the glacier palace of the Matterhorn glacier paradise in Zermatt, where 20 student teams from nine European countries came together at the invitation of the Swiss Space Center and the European Space Agency (ESA). They all arrived with their innovative inventions to investigate how we could make life on the moon possible for humans. What might have sounded like science fiction a few years ago, no longer seems so farfetched in light of the increasingly apparent impact of environmental destruction.

The aim of our project was to demonstrate that a robot can be sent to the moon to build a structure that will make it possible to establish safe housing.

Towering at a height of 3883 meters and extending 15 meters below the surface, the glacier exhibits extreme conditions similar to those found under the moon’s surface. The temperature there is a steady -4 ° Celsius. It therefore takes a truly inventive spirit to make the most of these inhospitable conditions. The spectrum of applications presented ranged from architectural designs for a lunar habitat and ideas for efficient food production to artificial intelligence that adapts to the astronaut’s preferences. CHIRON, which was specially equipped with a chainsaw, was able to fully play to its strengths at the event: “The aim of our project was to demonstrate that a robot can be sent to the moon to build a structure that will make it possible to establish safe housing. In concrete terms, this involves CHIRON using its chainsaw to cut out blocks of ice and putting them together to form ice walls,” Peter explains.

At present, CHIRON is not yet an autonomous robot. It is operated by humans using a PC interface that offers two options – controlling individual joints to move the robot arm and setting a trajectory for the robot to follow. It then independently calculates how its joints should move – as is the case with the plaster spray process mentioned earlier. However, there are concrete plans to develop CHIRON into an autonomous construction site robot. For example, the team is currently working on software that will enable the robot to detect and pick up stones and assemble them into a structure – all without any human input. When it comes to their professional futures, the students certainly struck lucky with CHIRON: “We can apply a lot of what we’ve learnt in our studies here on a large scale. And the practical experience is worth its weight in gold,” says Peter.